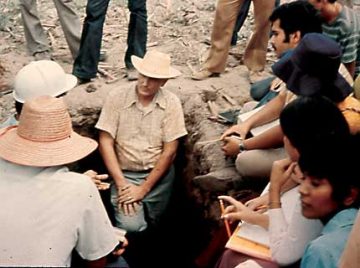 Unless you live on a volcanic rock in the middle of the sea, soil is all around you. And it all looks pretty much the same—that is, unless you happen to be a soil scientist like Dick Arnold. He’s spent his career managing different kinds of soil, and it’s taken him to every corner of the globe.

Arnold comes by his passion honestly, as his father was an agronomist for the Soil Conservation Service. That work meant frequent moves for the family, who would spend just a year or two in a series of small towns throughout the Midwest. But this peripatetic lifestyle would prepare the younger Arnold well for his future. Educated at Iowa Sate and Cornell—undergrad at Iowa followed by his master’s at Cornell, returning to Iowa for a Ph.D. and then back to Cornell as associate professor of soil sciences.

It was during his time at Cornell that Arnold first went abroad, in service of a Cornell program called Tropsoil. “Our goal was to transfer our knowledge of soil management to the tropics,” Arnold says. “It was teaching this course and interacting with the students that helped me realize that I wanted to spend most of my life helping people understand soils.”

And he did. in 1980 Arnold made the move from academia to policy, becoming director of the soil survey division of the Soil Conservation Service in Washington, a position he held until retirement. Here, Arnold was able to travel to places forbidden to most Americans, including communist China and the Cold War-era Soviet Union. Arnold’s friendship with Russian geologist Ilya Sokolov exemplifies the open, generous spirit with which Arnold approached all of his work: “[Sokolov] was one of the most interesting scientists I knew! … The Russians had been isolated, and here he was, not the enemy, but a fellow scientist!”