This panel discussion explored the history of the BGPSA with past leaders whose contributions have had a lasting impact on the greater Cornell graduate community.

View the recording of the Fireside Chat with Black Graduate Alumni.

Read an article about this panel discussion.

Tibra Wheeler is a 5th year Ph.D. candidate in Biomedical Engineering with a concentration in orthopedics, biomaterials, and drug Delivery at Cornell University. Tibra’s research focuses on determining the role of the immune response in osteoarthritis (OA). Tibra is a National Science Foundation Graduate Research Fellow, a Colman Scholar, and a Cornell Dean Scholar. Prior to Cornell, Tibra received her BS in Biomedical Engineering from the University of South Carolina. Outside of research, she has been heavily involved in giving back to underrepresented minority groups through her mentoring work in various offices across Cornell’s campus working with high school, undergraduate, and graduate students. Tibra hopes to continue her work to take leaps and bounds towards changing the status quo and changing what the world “thinks” an engineer should “look” like.

Chavez Carter is a native of Summit, MS. He is a graduate of the College of Biomedical and Biological Sciences in the Department of Immunology and Infectious Disease with Dr. Avery August. After graduation, he went on to do a Post Doc in Recombinant Immunotherapy under Carl Batts. Chavez was very active both academically and civically. He is a recipient of the Alfred P. Sloan Fellowship, Cornell Provost Diversity Fellowship, Distinguished Leadership Award, and Cornell University Student of Color Exemplary Service Award. Additionally, he is a member of the Bouchet Graduate Honor Society and Omega Psi Phi.

After leaving Cornell University, Chavez started a career in medical affairs as a Medical Science Liaison. He has successfully helped to launch new biologic therapies in the field of dermatology. Currently, Chavez is the Director of Medical Relations at La Roche-Posay of L’Oreal. He is tasked with heading medical dermatology and key opinion leaders relations.

Dr. Cameron Bardliving is Director of Operations at the Jefferson Institute for Bioprocessing (JIB) and Assistant Professor in Kanbar College of Design, Engineering & Commerce at Thomas Jefferson University. JIB is a state-of-the-art single use GMP simulated training facility dedicated to closing the workforce gap in biopharmaceutical manufacturing and development through on hands-on training of industry professionals and students. He has experience in academia and industry with a focus in bioprocessing and biopharmaceutical processing development. Prior to joining JIB, Dr. Bardliving was an Assistant Professor in the Amgen Bioprocessing Center at Keck Graduate Institute where he led research activities with industry partners in the areas of continuous biomanufacturing, computational modeling and emerging therapeutics. He received his B.S in Chemical Engineering from the University of Maryland, Baltimore County and his PhD in Biomedical Engineering from Cornell.

Enongo Lumumba-Kasongo is a Gateway Postdoctoral Fellow in the Department of Music at Brown University, where she teaches courses in rap songwriting and feminist sound studies. She earned her PhD in Science & Technology Studies from Cornell University in 2019 where she was inducted into the Bouchet Graduate Honor Society. Her doctoral research explores the politics of community-studios, a term she has developed for fixed and mobile recording studios that prioritize working with artists from “underserved” communities as well as women and non-binary artists with the goal of providing these groups with free and low-cost recording services and education.

In addition to her research and pedagogical practice, Dr. Lumumba-Kasongo also performs original music as a producer and rapper under the moniker Sammus. In 2019 she began working as an audio director at Glow Up Games, an R&D game studio responsible for developing a rap composition video game based on the HBO scripted series Insecure. Drawing on her experience working on the game, Enongo’s forthcoming research will focus on the challenges of designing rap composition tools that prioritize hip-hop heads and gamers while engaging with broader cultural conversations about problematic yet ubiquitous phenomena like “digital blackface,” “blackfishing,” and the “blaccent” as they are performed and circulated on apps like TikTok and Instagram.

Dr. Lory O. Reveil is currently the director of scientific and regulatory affairs at the American Frozen Food Institute. She holds a Ph.D. in Microbiology with a specialization in Food Microbiology and Genetics from Cornell University. Dr. Reveil received Bachelor of Science degrees in Biology and Psychology from the University of New Mexico, where she was an IMSD scholar and graduated Summa Cum Laude. She is passionate about mentoring and is a strong advocate for engaging young people in science. During her studies at Cornell, she spearheaded science literacy efforts as part of 4H and Expanding your Horizons to provide hands-on experience to underrepresented New York-area middle and high school students. Her work and service have been recognized through acceptance in the prestigious Bouchet Honor Society. 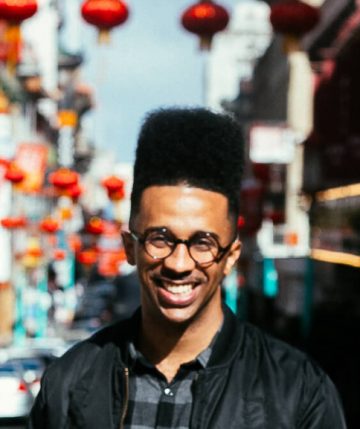 Dexter Thomas is from San Bernardino, CA. He graduated from The University of California, Riverside in 2006 as an English major,  Dexter lived in Tokyo for a few years, is fluent in Japanese, sorta okay in Spanish and Mandarin, Dexter earned a PhD in Asian Studies from Cornell University where he was inducted into the Bouchet Graduate Honor Society. He spends most of his days on journalism, working as a correspondent on Vice News Tonight, formerly on HBO, now on VICE TV, and sometimes on Showtime.

Thus far, Dexter has received a Fulbright, contributed to Pulitzer-winning coverage in his work with the Los Angeles Times, and has been nominated for an Emmy (twice). He also established the world’s largest public collection of Japanese hip-hop. He is still working on getting that XXL Freshman nod though.

The Black graduate community at Cornell is reflective of the broader African Diaspora and includes members who strongly identify with their roots in Africa and the Caribbean. This panel discussion with Black graduate alumni representing diverse identities within the African Diaspora explored their experiences in building community and establishing a sense of belonging as graduate students at Cornell.

View the recording of the Coffee Chat with Black Graduate Alumni.

Bam Willoughby is a Doctoral Candidate of Africana Studies at Africana Studies & Research Center at Cornell University, where they serve on the Executive Council of the Ottoman and Turkish Studies Initiative and are affiliated with the Near Eastern Studies Center.

Before teaching as a Doctoral Candidate at the university level, Bam taught for three years in the standardized test preparation system, at Testmasters Education Center and for four years as a Spanish Language Instructor in Dartmouth College’s Department of Spanish Languages and Literatures. They held a visiting researcher fellowship at Koc University’s Graduate School of Arts & Sciences. These days, Bam is a managing editor of Edinburg University Press’s Gender and Islam Book Series Advisory Board.  Outside of academe, Bam was a former coordinator of Ithaca’s Planned Parenthood LGBTQ Youth Program.

Ornella is originally from the twin-island Republic of Trinidad and Tobago. She received her B.S. in Chemistry from Cameron University in 2012 and her Ph.D. in Chemistry and Chemical Biology from Cornell University in 2018. During her Ph.D., she received a Provost’s Diversity Fellowship, a NIH funded Chemistry Biology Interface Grant and was inducted into the Bouchet Graduate Honor Society. She was also a Graduate Student Ambassador, a mentor for the Graduate Students Mentoring Undergraduates (GSMU) program, and a member of the Black Graduate Student Association (BGPSA). She served as BGPSA President in 2015. Currently, Ornella is a Senior Scientist at the pharmaceutical company AbbVie, where she performs protein conjugations and analytical characterizations to support Biologics discovery programs.

Dr. Stéphie-Anne Dulièpre is a recent graduate of the Cornell University College of Veterinary Medicine class of 2020. She was born in Queens, NY but has lived in Haiti for the 11 years before returning to the States. She graduated from Hunter College in New York City with a major in Biology and minors in Dance as well as Mathematics & Statistics. Dr. Dulièpre is passionate about anything involving conservation medicine, public health, and policy/advocacy and one days hopes to expand her work in Haiti. She enjoys engaging with underrepresented communities and finding new ways to get people excited about veterinary medicine who would otherwise not have access to the field. Dr. Dulièpre has been involved in organized medicine and DEI during and after her studies and is currently on the board of the Multicultural Veterinary Medical Association (MCVMA) where she engages with and advocates for veterinary professionals of all backgrounds and circumstances.  She has been running competitively since high school and today she can still be found running a few 5k races in her spare time. Currently Dr.  Dulièpre is a Supervisory Public Health Officer with the U.S. Department of Agriculture in Pennsylvania and a Veterinary Associate at the Eastern Animal Hospital in Baltimore, Maryland.

Ikenna joined Oregon Health and Science University’s (OHSU) Knight Cancer Institute (KCI) as a Senior Alliance manager and brings over a decade of leadership in antiviral drug development, discovery to first-in-human clinical trials, program management and business development. Since joining OHSU, Dr. Madu has had the pleasure to support and drive partnership efforts that align with KCI and its goal to eliminate cancer.

Most recently, Dr. Madu was a senior scientist at Kineta Inc. where he led in the development of LHF-535, a potent Lassa hemorrhagic fever antiviral. He made significant contributions to describe this potential therapy as a broad-spectrum arenavirus antiviral and supported efforts to secure millions of dollars in non-dilutive funding and to get an antiviral asset to the clinic.

Prior to joining Kineta Inc., Dr. Madu was a Molecular medicine research fellow in the lab of Dr. Yuan Chen at the City of Hope in Duarte, CA. He led the early characterization of a small molecule scaffold with anti-HIV properties. At Cornell University, Dr. Madu also worked briefly as a Post-Doc in the lab of his Mentor Dr. Gary Whittaker to highlight the roles host proteases play in coronavirus entry.

Dr. Madu received his Ph.D. on SARS-CoV entry from Cornell University and his MBA with a marketing focus from Washington State University. Dr. Madu has a strong sense of duty to translational R&D and the ways it can seed innovative, faster, cheaper, accessible and safer therapies across many indications.