Graduate SchoolAnnouncementsCarriage House to Student Center: The Big Red Barn Over the Years

Carriage House to Student Center: The Big Red Barn Over the Years

When the Big Red Barn (the Barn) was constructed in 1874, it was unlikely anyone knew how integral it would become to life at Cornell, particularly for graduate and professional students. At that time, its sole function was to serve as President Andrew Dickson White’s carriage house and stable.

The Barn saw many transformations in its 144-year history, from a shelter for large animals to a cafeteria, an alumni center to a storage facility. It was not until much later that the Barn became the Graduate and Professional Student Center.

Before the Barn housed a student center, graduate and professional students gathered in a residence lounge in Sage Hall, which they called “The Henry” for its namesake, Henry Sage. Here students began the Cornell graduate student tradition Tell Grads It’s Friday (TGIF), a happy hour on Friday nights, then with free beer. 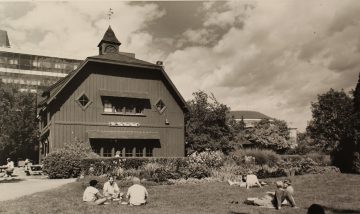 “It took several years to convince the administration that renovating the Big Red Barn for that purpose was a good idea, but our hopes were always high that it would become a reality and a success,” said Sharon Boedo, Ph.D. ‘05, former graduate student manager of The Henry and head of the steering committee that recommended the Barn be repurposed into a student center, in a letter commemorating the Barn’s 20th anniversary in 2012. “As proud as I am to have earned my Cornell Ph.D., I am equally proud to have contributed to the Big Red Barn Graduate and Professional Student Center.”

The successful shift from the Henry to the Big Red Barn allowed for the first Big Red Barn Manager Victoria Blodgett to host events and transform the space into a true center for the graduate and professional student community. In 2018 alone, the Barn hosted more than 200 events. 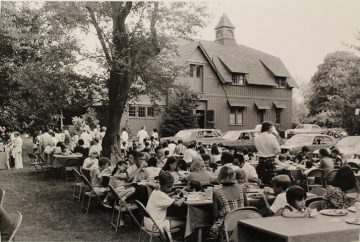 “As a grad fellow, I was fortunate to be part of that creative moment and become a part of Kris’s ambitious vision,” said Richard Kiely, Ph.D. ’02, the first Big Red Barn Family Fellow and now senior fellow in the Office of Engagement Initiatives. “At a time when the Barn was in need of new life and energy, the three of us [original fellows] (with other grads) worked to build a supportive environment for graduate students with the hopes that grad students would find a home in the Barn. We wanted to develop activities that would help grads build a thriving community.” 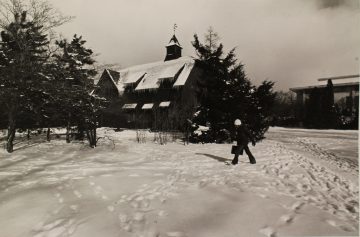 From TGIF to Chocolate Fest to the Family Holiday Party, the Barn offers events targeted solely for the graduate and professional student community. Here students can relax, socialize, or work uninterrupted without getting course-related questions from undergraduates they TA.

According Irene del Real Contreras, Ph.D. ’19, a former Big Red Barn Arts Fellow, “It’s a place where I could go and write all morning. It’s where I met up with friends for coffee or lunch and caught up or where I could go for a beer and to socialize at the end of the week. It was also my workplace for the last four years.”

For mechanical engineering doctoral candidate Nate Rogers, seeing the Barn through the eyes of graduate students from other Ivy League institutions helped him appreciate how special the space is. In 2018, the Graduate and Professional Student Assembly hosted the 2018 Ivy Plus Summit and invited participants (all graduate students) to TGIF. 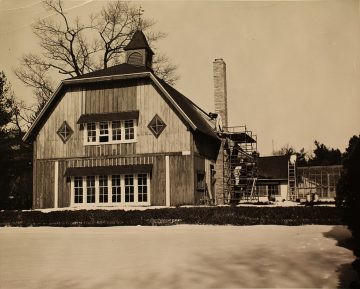 “I was very proud of how smoothly things went in the space and how envious the other Ivies were that this was our graduate student center. It was cold outside, but the warmth inside (from the food, fireplace, and the people) reminded me of how special the Big Red Barn is,” he said. “It’s easy to get stuck in a rut and forget how amazing some of the things right in front of your nose are. Since then, when I walk through the Barn, I try to make a special effort to soak it in because I know it’s one of the things I’ll miss most once I’ve left Cornell.”

Throughout its time as the Graduate and Professional Student Center, the Barn has left its mark on many. In fact, when not filled with students, the Big Red Barn occasionally functions as a venue for wedding ceremonies and receptions. Corda mentioned knowing several couples who met at the Barn and later chose to marry there. 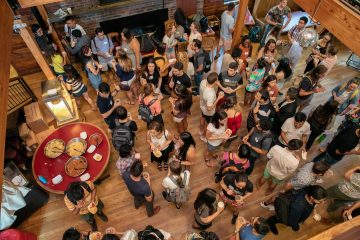 “There was a wedding announcement in the New York Times, and the couple had met at a speed dating event at the Big Red Barn,” she said, laughing. “And he actually wasn’t a Cornell student. He had snuck into the speed dating event and they got married.”

With new manager Jennifer Forbes, who began in February, the Barn will continue to serve as the special place the steering committee envisioned it to be while continuing to provide new offerings.

“It’s critical for Cornell students to have this space and connection point with other graduate students,” she said. “The home-like feel of the Barn encourages students to stop in often to study, eat, connect, write, and so much more. It is a really special space for current and past graduate students!” 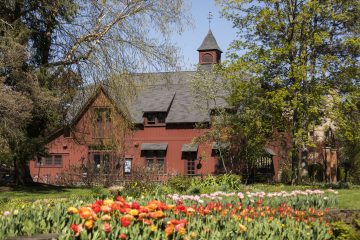 “It’s central campus, [graduate students] can just come in and have a cup of coffee and get back to their lab, but it’s to meet people from other fields,” said Corda. “It’s so important for their wellness, that there’s a balance in their lives.”

For more information on the history of the Big Red Barn, see Ronald E. Ostman and Harry Little’s Cornell Then and Now (McBooks Press, Inc., 2003).

Katya Hrichak is a communications assistant in the Graduate School.