Students educate broad audiences on the science of mRNA vaccines 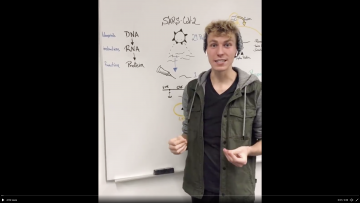 To Rob Swanda, a doctoral student in the field of biomedical and biological sciences, it was immediately clear how messenger RNA COVID-19 vaccines work. But to his nonscientist parents, it was not.

Swanda answered his parents’ questions, using everyday language to explain the vaccines’ complex mRNA technology. Impressed, they asked him to record a video of his explanation to share with friends and other family members.

Swanda recruited biochemistry, molecular and cell biology doctoral student Irma Fernandez to film the video – neither of them knowing that it would go viral once posted to social media.

Millions of views and thousands of comments later, the pair realized they were on to something. Swanda began making additional explanatory videos, which tackled different COVID-19 vaccine questions, and Fernandez created Spanish translations. They were among many graduate students to produce such videos – including Juliana González-Tobón, a plant pathology and plant microbe biology doctoral student, whose videos were intended originally to educate her Colombian parents but now reach an extended Spanish-speaking audience.

“Specific jargon and technical terms make the research uninviting and form a barrier to understanding the information,” Swanda said. “This video series focuses on distilling scientific information for everyone. Translating the videos into multiple languages further eliminates barriers that hinder the advancement of science education.”

Said Fernandez: “When people do not understand the science, this leads to a general distrust and fear of scientists, of research, of doctors and ultimately of the medication the public is receiving. This lack of understanding can also lead to misinformation and myths, which Rob began to debunk in his follow-up videos.”

As members of the Cornell Society for Advancement of Chicanos/Hispanics and Native Americans in Science (SACNAS), Swanda and Fernandez were interested in not only making the science accessible to the general public, but also using the videos to actively advocate for diversity and inclusion in STEM – one of SACNAS’s missions.

“I hope these videos can inspire someone to pursue science and to understand how interesting the concepts can be,” Swanda said.

“These videos increase representation of what a URM scientist looks like,” Fernandez said. “Representation matters.”