Graduate students, partners, and families gathered together to celebrate the season with pumpkin carving in the Big Red Barn Oct. 20. For more photos, please visit the Graduate School Flickr album.

‘Be a Voice for Change,’ Sotomayor Tells Cornellians 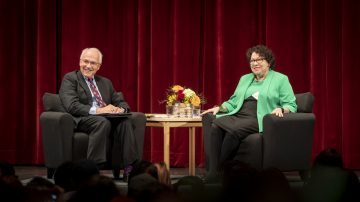 Success did not come easy to Sonia Sotomayor. She knows how much pain there is in life. But hard work, a determination to fight for her beliefs and an “innate optimism” helped propel her from a childhood in a Bronx housing project to her role as associate justice of the U.S. Supreme Court, Sotomayor told nearly 1,200 students, faculty, staff and guests in a highly personal talk Oct. 18 in Bailey Hall.

Described as a “fireside chat,” Sotomayor’s easygoing conversation with her longtime friend Judge Richard C. Wesley, J.D. ’74, U.S. Court of Appeals for the Second Circuit, ranged from her diagnosis with diabetes at age 7 to her earliest impressions as a first-generation student at Princeton University; from how she found refuge in the public library after her father’s death to her fears that she would lose herself once she ascended to the Supreme Court.